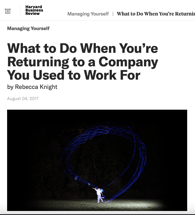 In her August 2017 Harvard Business Review article "What to Do When You're Returning to a Company You Used to Work For," Rebecca Knight interviewed Michael Watkins about "boomerang employees," giving practical advice for how to reintroduce yourself to an organization you used to work for, including a helpful list of do’s and don’ts (see below).

There are many reasons why you might decide to return to your old employer, according to Watkins. You might have “realized the culture was wonderful and you miss it.” Or maybe you “were attracted by a great offer but it didn’t pan out.” Perhaps you originally left because you “felt dead-ended in your career and now have an opportunity to come back at a higher level.” Regardless, being a boomerang employee means that “you’ve been given a do-over,” Dillon says. “Hopefully, you’re coming back in an elevated position, so you need to change the boundaries and reestablish yourself as a more senior person in the organization,” she says. As you’re meeting new colleagues and re-meeting old ones, highlight that “you’ve had development opportunities and a new growth experience” — whether it was a job in a new industry, a stint in a different part of the world, or graduate school — and that “you’re happy to be back” to apply “what you’ve learned.”

“People will absolutely ask you” about why you originally resigned, so it’s wise to construct a narrative that answers their questions, Watkins says. Your explanation ought to be honest and candid — to a point. “There is nothing to be gained by saying anything negative,” particularly if you were unhappy in your job. “No one wants to hear about how bad the company was when you left,” Dillon says. After all, “you voted with your feet by coming back.” If a colleague presses you on the issue, “look forward, not backward” and “imagine that someone is recording your response and will report it back to your colleagues.” In other words, make sure “there’s integrity in your answer.” The same goes for talking about why you left your other organization. “Life is long,” she adds. “You never know the twists and turns in the road and who you are going to work with again.”

When you left, “people had a certain view of you and your capabilities,” Watkins says. Now that you’re back, you need to demonstrate — in both your approach to the job and your office demeanor — that “you have had new experiences and you’ve grown.” This can be “especially challenging if you’re brought back into lead your former peers or maybe even your former boss,” he says. “But the fact that you’ve been away” and presumably have learned a lot in the process “is an asset.” Dillon recommends being “a bit more formal and reserved in your behavior, at least at first,” in order to showcase how “you’ve matured.” Your colleagues “will either see you with fresh eyes or the same eyes within the first few weeks,” she adds.

…And reset your own, as well

Your coworkers aren’t the only ones who need to adjust their expectations. “You remember the organization exactly as you left it,” Dillon says. But in the meantime, “power has shifted, people have come and gone, and your colleagues have had new challenges and have grown too.” You need to acknowledge that “the context has changed” and learn the new lay of the land. Watkins likens the experience of being a boomerang employee to that of an expatriate returning to their native country after a few years. “The country has changed, and you’ve changed,” he says. “There will be aspects of the culture and processes that are familiar, but don’t be disappointed if what you come back to is different from what you remember.”

The best way to “get up to speed quickly,” according to Dillon, is through a series of “onboarding conversations” with managers and coworkers. “Show interest in the organization as it is now,” she says. “Find out how it has changed. And ask, ‘What have you tried that works? And what hasn’t worked?’ Don’t assume you know.” These conversations are also “a good chance to express your eagerness to do new things by demonstrating your interest, skills, and capabilities.” Again, it comes down to “having awareness that things are not likely to be the same,” Watkins says. Whether you’re familiarizing yourself with new processes or new people, there will be a learning curve.

Network around the company

Perhaps the biggest potential pitfall of returning to your old organization is that it’s easy to “fall into your old habits and patterns,” say of “eating lunch with the same old gang” and “socializing with the same old people,” Dillon says. To ensure that doesn’t happen, make a conscious effort to network around the company. You must resist the temptation to “gravitate toward the familiar,” Watkins says. Summon “the mental discipline to think, ‘If I were really brand-new here, what would I be doing?’” Think about “the alliances you’d need to build and the people you’d need to connect with,” he says. Beware, too, that because it’s likely that you are coming back to your employer with higher status, “the politics of an organization changes at different levels.”

Your colleagues “will be looking to you for new perspectives and approaches,” Dillon says. “You now see the world from a different set of eyes.” But sharing your newfound knowledge requires a deft touch. “You need to find ways to contribute to the conversation without smothering it” by showing off “your newfangled ways,” she says. Be subtle. Say things like, “In the past, I had good luck with this approach.” Or, “One thing that really struck me about my last organization was how we did this.” Avoid gratuitous criticisms, Watkins adds. You need to strike a “balance, bringing in ideas from the outside without causing” others to think “that you’ve gone away and become too big for your britches,” he says. You don’t want to “imply that you’ve see it done better at other places and now you’re back to fix a mess.”

And yet sometimes you really have been brought back to fix a mess. “If you’re entering a turnaround situation,” you need to be prepared to “inject new ideas” and make some tough decisions right away, Watkins says. On the other hand, “if things are pretty good in the organization,” you ought to “pace yourself” and take your time getting reacquainted with the company. “Don’t shortchange the learning process” with your eagerness to hit the ground running. “Engage in dialogue with people, rather than going in with guns blazing,” he says. “Focus on the way you’re going to lead as opposed to exactly what you’re going to do.”