If a Leader Fails, It's Because He/She Lacks Emotional Intelligence

On a recent trip to Barcelona coinciding with the release of The First 90 Days in Spanish, Michael Watkins and Richard Wetzler, Co-founder and CEO of Genesis, respectively, met with leading business men and women in the region. The 2-day tour included a Master Class given by Watkins to 100 business leaders, a book signing reception, interviews with two of Spain's leading newspapers, La Vanguardia and Expansion, a dinner with Harvard and IMD Business School Alumni and prominent Spanish business leaders, followed by meetings with Suez and CaixaBank.

Following is a translation of the interview Michael Watkins gave to La Vanguardia entitled, "If a Leader Fails, It's Because He/She Lacks Emotional Intelligence." 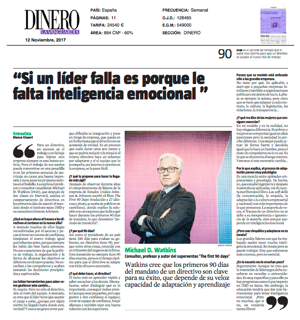 CEO coach, professor and author of the best seller The First 90 Days, Michael Watkins believes that the first 90 days of a leader's term are key to his success. For a leader, a promotion or an opportunity to lead another company is always good news. But the work of your dreams can become a nightmare if in the first weeks of landing it, you do not give a good impression, explains the Canadian-born professor and Genesis Co-Founder, who after lecturing at Harvard and INSEAD became Professor of Leadership and Organizational Change at the IMD Business School.

What is it that leads leaders to fail when sitting in the new chair?

Often many of them arrive comforted by the promotion and they err because they have an excess of confidence. They manage the new job as they did before, because they had always done well until then. They are not aware that the work policy, the organization and the way to achieve the objectives are different in the new position. They do not listen to their colleagues and they end up making hasty and wrong decisions.

They lack tools to know how to manage this change?

Yes, exactly. Not only the leader, but the rest of the team. Often, it is believed that the leader has to assume the position alone, because by some merit he/she has come to a position of leadership, right? This is a serious error because it hinders his/her integration and puts the company at risk. It is a process that usually lasts about six months and could be reduced to half if the same manager makes an effort to adapt and if the team that accompanies him, whether internal or external in the company, makes it easy.

And what do you propose to make the arrival more agile?

After years of observing the behavior of leaders of the US company Johnson & Johnson, I wrote the book The First 90 Days (translated into 27 languages and now, it has just been published in Spanish), where I explain the solution with a scheme that indicates what to do during the first 90 days of the mandate, what I call the "transition period".

Just as the president of a country has 100 days to evaluate his government, a leader has 90 days, because among other things, it coincides with a quarter of the firm's business. This transition does not always last 90 exact days, but it is the optimal time for the leader to adapt successfully to the new scenario.

And what should he do, the new leader?

Success is in learning fast and knowing how to listen to others. To become aware, to know what is important, to achieve early successes (even if they are small, they give confidence to the team), to create your team of trust, to forge alliances and also to weave a good relationship with superiors.

It seems that his model is focused only on large companies.

It does not have to. It is applicable to start-ups, to small family businesses, to mid-sized companies, and also to political organizations that are not at the same level. The base is always the same, but of course you have to adapt context, culture, legislation, relationships, transparency...

And what about the women who get promoted?

In my model and in reality, there is no difference. Men and women behave the same in high positions but society perceives it differently. A woman can act as strongly and decisively as a man does, but the rest of her classmates do not see it that way. It is what is called internal bias. We'll see if this scenario changes...

For what it sounds like, the adaptation process seems very psychological.

It is a mix between business skills and psychology. In fact, I, who studied engineering and then applied mathematics, realised in writing the book that soft skills (communication, empathy, adaptation to business and national culture) are more important than we think. Most times, the failure of a leader is not due to his or her inexperience or ignorance of the subject, but because he or she lacks emotional intelligence.

But to be sympathetic and to adapt is not innate.

The great leaders with whom I have worked tend to have a lot of emotional intelligence. It is not innate, but you can work at it. We must try harder, but it is essential.

Could they teach us this at school?

Surely. Although I do not think that leadership transition should be taught in schools or universities. It is specific and for that reason there are programs like those offered at the IMD in Switzerland. However, school could provide more tools to build emotional intelligence. But not many, otherwise I would not sell any books!

Genesis Joins Inc. 5000 List of America's Fastest Growing Companies
Are You Ready to Be Coached?